Evaluated for Professionalism and Tested for Expertise

Catherine M. Rodriguez is a founding partner of Filler Rodriguez, LLP in Miami Beach, Florida. Ms. Rodriguez practices exclusively in the areas of marital and family law. Prior to dedicating her practice to family law Ms. Rodriguez acquired extensive trial experience as a commercial litigator representing numerous businesses and parties in complex business lawsuits. She has tried numerous jury trials and bench trials. In 2000, she worked with the legal team that personally represented President George W. Bush in Bush V. Gore, 531 U.S. 98 (2000), the United States Supreme Court decision that settled a recount dispute in Florida’s 2000 presidential election. In 1998, as a former Broward County prosecutor and County attorney, she brandished a tough new zoning ordinance that ordered seven sex businesses out of the county.

Ms. Rodriguez understands that family cases require consideration of the ongoing relationship and she encourages amicable settlements between litigants whenever possible. She is fluent in Spanish and she handles international divorces and regularly represents litigants from around the world with diverse finances, business interests and cultural differences. She also has received a commendation from the United States State Department for her dedication to representing parents under the Hague Convention on the Civil Aspects of International Child Abduction.

Ms. Rodriguez has become a legal expert in marital and family law by becoming Board Certified in Marital and Family Law in 2018. Only a small portion of Florida family law practitioners are Board Certified which requires rigorous testing and vetting by lawyers and judges.

In 2021, Ms. Rodriguez was admitted as a Fellow to the prestigious American Academy of Matrimonial Lawyers (AAML). The AAML is an organization of the most dedicated and professional family law lawyers who are recognized by both the bench and the bar as the leaders in the field. The AAML has a stringent vetting process to admit Fellows which includes peer reviews, judicial references, written testing and verbal panel test.

Ms. Rodriguez has been AV Preeminent Rated by Martindale-Hubble since 1999. 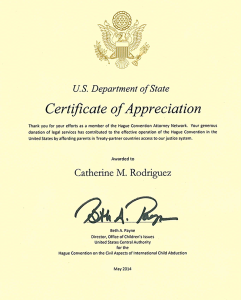